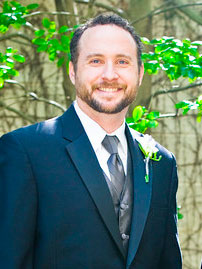 Adam Bell has been a vocal performer and recording artist for well over two decades. He has performed for a President (twice), dueted with Emmy Rossum (Phantom of the Opera), sung the National Anthem at the San Antonio, TX AT&T Center, performed the lead role in Joseph and the Amazing Technicolor Dreamcoat (2016 ~ Joseph) and Oklahoma (2018 – Curly McClain) both with the New Braunfels Theatre Company, and served as the Song Leader at Christ Presbyterian Church in New Braunfels for over eight years, ending in July of 2020.

Adam began offering voice lessons in 2012 and also taught many ‘Voice for Teens’ and ‘Sell a Song’ classes with Christian Youth Theater over a period of about seven years.

Adam’s students have gone on to land leading and featured roles in numerous stage musicals here in New Braunfels and San Antonio, successfully competed in regional and national competitions, with many also accepted into the renowned North East School of the Arts (San Antonio, TX).